My thoughts about the Republican Convention and Mr. Eastwood’s Participation 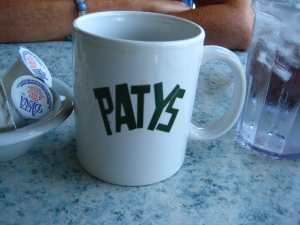 Last night Tulip called me from Tuluca Lake. It was a quarter till four in the morning  Florida  time and I knew that she was probably halfway through her second bottle of Fairbanks port. I wasn’t about to answer the phone (you have to know Tulip). Besides, I was sleeping. The next day I listened to her message:

“I thought you were writing a blog E.P.? Holy mother, I’m looking at this lame excuse you have for a website and I don’t see sh*t about nothin’ that went on at that Republican Convention last week. Don’t you know that Clint Eastwood was talking last night? Couldn’t you come up with something to say about that?”

Even though I haven’t seen her in almost six and a half years, I could picture Tulip – a porcelain coffee mug of Fairbanks in one hand, an American Spirit dangling from the left corner of her mouth and her white Chuck Taylor All Stars planted firmly on the coffee table that faced the tiniest television set that anyone in Southern California confesses to owning. If you didn’t know Tulip, you would never know that she’ been married twice to the biggest name in professional wrestling to ever come out of St. Joseph, Missouri.

The next day I called her. I called late in the day of course, and caught up with her at Paty’s Diner – no question about it,  the best place in Taluca Lake for lunch. Tulip was a little hung over and a little feisty, but what’s that among friends. The first thing that she asked me was what I thought of Clint Eastwood’s speech at the Republican National Convention the night before. I told her that I hadn’t really watched much of it and she asked me why.

“I was watching the Green Bay, Kansas City pre-season game,” I told her. After she berated me a bit, I came to realize that I had missed something important – on purpose, so I turned to the internet, and I watched Clint’s speech several times as penance for my football sins.

“You need to say something about that Clint Eastwood speech last night EP or forget about blogging.”

Clint Eastwood is one of my favorite movie actors. I will watch his movies as long as I am alive to watch them. The “Bridges of Madison County” was filmed in my hometown in Iowa, and I have a special affection for his westerns. Yeah, I know that the line “make my day” came from his Dirty Harry days, but to me he will always be the Man With No Name. Ok…enough ass kissin’.

Mr. Eastwood is a life long Republican and makes no secret of that. He ran as a Republican for mayor of Carmel, California and has always backed Republican candidates, so I felt no particular surprise when Clint addressed the RNC. ( I thought that the backdrop used from the “Outlaw Josey Wales” was inappropriate considering the recent violence in Colorado, but what the heck.) I went online and listened to Clint’s speech twice.  I thought for an 82 year old actor he gave a great performance. And it was a performance – but I thought that Clint could have done a much classier act. The empty chair was a lame prop, and to put the POTUSA in it and lecture him was, well, frankly beneath the likes of Clint Eastwood.  You know, we have a lot of respect for the office of the President – Clint knows that – and then he messed up a couple of facts too, and when it comes to Afghanistan, we all know who decided to mix it up over there and it wasn’t Obama.

So I am over it with politics for now. Next week I am planning a piece on conspiracy theories surrounding the Apollo moon landings. Won’t that be a hoot. Bizarre just like the Republican National Convention.

Follow Ed's end of the planet books on WordPress.com
Join 1,448 other followers

"in all chaos there is a cosmos, in all disorder a secret order." - carl jung

a repository of experimental haiku & poetry

I think a lot but write very little.

Poetry for Finding Meaning in the Madness

welcome to my metaphors

www.shadowofiris.com/
Eye Will Not Cry