…a guy
who has fifty grand
left in the bank,
a guy who has
a cancelled
AmEx Card
in his wallet
and has recently had
his powder blue
Bentley repo’d

if he’d ever met
Don Johnson
on the set

old actors die hard
this one smiles politely
drains his gimlet
and signs the napkin.

… and we discussed
the disappearance of
his truck
from a non-descript
stripmall
in North Las Vegas
and the eventual
disintegration of
his new outlook on life.

and after that I

where he used to fish
…a long way
from Long Beach, California
…so far you’d have
to take
six buses to get there
and now
they say

Margie…
…she didn’t even know
that he had a gun…

…he was too
young to have
died fishing
but he did…

…and he
didn’t tell
anyone
he was going
(fishing)
did he?

after dark
he knows
his way along the animal trail
that crosses my back yard
better than
my neighbor, McDougal
knows the way home
after midnight from
the Black Thorn

…the one I wait for…

has escaped
for a year.
Now I hear him
rustling in the fence row
darting past
the 4 volt landscape lites
hiding for a moment
behind the hibiscus
sensing, maybe
the shit to come
but he makes
his move

…I am careful, though
I’m sitting on an overturned bucket
wearing a bathrobe
and
flip-flops made
in Okinowa

AND I have
my sister Muriel’s
22 single shot
sighted carefully
as I,
in silence wait
for him

…and then he’s upon me
six, or seven feet away

Keep the dogs in, I yell to Leah
he hears me and
then he freezes, teeth clacking
eyes flashing

later, Leah asks
if I got him
and I say
almost.

The other evening at a writers’ meeting, one of our members, who is also a reader here at EEOTPB, asked if I had any new writing projects in the works – apart from the sporadic poems that I post. I told her that in recent months, my day job as a technical writer had left me creatively drained, and that the last half of 2014 had been especially demanding. For that reason, I hadn’t been able to spend as much time on some of my personal writing projects as I’d liked. Several projects that I should have completed by now have languished — sunk into the proverbial electronic dustbin, now  nearly beyond retrieval. Even blog posts that I wanted to write – intended to write – have grown stale under the heavy foot of “The Man” who puts food on my table, gas in my tank, and keeps my golden retriever Bailey supplied with expensive ‘all-natural’ dog food. I mean, even blogs I want to read I haven’t gotten around to reading.

Then my friend told me that although she had enjoyed reading some of the poems on EEOTPB, she was a bit confused by my blog’s title, as there appears to be nothing about Ed, nothing about the end of the planet, and nothing at all about books.

I replied by saying that there is a great deal about Ed on this site if you read the poems carefully, and although there has been very little about the end of the planet (since that Mayan calendar scare that was freaking us out back in 2011 turned out to be pure rubbish), there is a bit about books…here and there…

It was at that point that I mentioned that I had collected about forty or so of the poems (many of which have appeared here), into a small volume of poetry, put a cover on it, and made it available to the reading public for a nominal fee. The name of the book is “outrunning the storm” and I shall provide a link here. But hold on! You needn’t rush to buy a copy. I’m going to give it away…right here…well, at least I am giving five copies to the first five people who email me at wepatt@hotmail.com. No postage necessary. I’ll foot that bill. Just put “ED – SEND ME THE BOOK” in the subject line, include a mailing address in the body, and I will send you a copy. And don’t worry, on down the line I won’t spam you with any ads or gimmicks, or give your email address to some shady internet marketing scammer who wants to sell you a time-share in Belize. In fact, you won’t ever  hear from me again!  And don’t think I’m going to ask you to write some flowery, fancy-pants book review either (unless you want to). I don’t work that way. 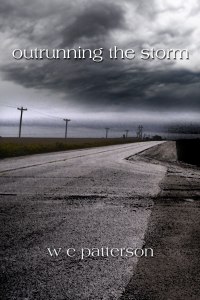 So back to my friend who congratulated me on the book, but then politely shook her head and told me that it was unlikely that I would sell any copies.

“Poetry does not sell,” she said flatly.

After that I left and went home and did a search for the 10 top selling poetry books this week. Without giving you a glimpse into my next blog, I will leave you with this teaser.

“I know Why the Caged Bird Sings” by Maya Angelou

“The Odyssey” by Homer

…and they say poetry isn’t selling.

to try to find

Kathy, that waitress
from the Fireside Tap
to see if she had finally
made up her mind
about

and to find out
if she’d ever

Albert Lea, Minnesota
to Montana
and you sat beside that
bass player for
a band

when you didn’t want to

and the
state department
and the POTSUS

ALL of whom had
conspired to destroy
Saskatchewan
piece by piece

you say that to yourself

…as long as the 99 Subaru
kicks over and that
landlady from hell
doesn’t show up
in her paisley shorts
and lime green tube top
yelling at you over
the bougainvillea
hedge
saying she thinks
that she
saw you on the News
last night…
…she says you look like
that swindler from
Miami Gardens
who conned a
94 year old widow
out of fifty grand
last week.

…but you don’t think anything
of it because
you don’t have a job, and

… you’re better off for it
aren’t you?
as long as you can
make it
to that casino
… on the edge
of the Everglades
just…before dawn
…rolling up with
a 50 in-hand
ready to throw it down
in the high-limit room

two spins and you’re done
now head off
to the 2.99
breakfast buffet

…and you’re better off for it
…aren’t you?
just go home
and stuff your mail
into a neighbor’s box
and tell the guy next door
that you are moving to
Dallas in two weeks
to accept a position
in marketing for an
emerging
startup

you are better off for
all of this.

they let a friend of mine
out of jail
3 days before Christmas
this year…
…he wasn’t a bad man,
he was a fine man
in some ways

he could
quote Shakespeare
like only
an educated
old drunk can
AND
he could speak at length
about Gauguin
because he liked painting
and he enjoyed,
drinking
vodka interspersed with
the occasional glass of
old red wine

while Haydn played
on the stereo
He was…
an accomplished
Old Hippie
who had attended
Woodstock
and in his later years
he’d become
…a savvy investor
who’d lost a fortune
to Wall Street
and said he
didn’t miss any of it
not him
Citizen of the World
a guy who
enlivened
dinner parties
and
sometimes,
spoke passionately
of the simple pleasures
of life in the country
a man who enjoyed
illegal cigars
and drank wine that
few could afford,

I was flying over Orange County
one night last year, and
…I sat next to a guy
on the airplane
who said he was the
chief executive officer
of a corporation
(can’t recall which one)
and we drank
two double scotch
whiskeys
together
as we flew over
the Grand Canyon.
“There’s the Big Ditch,” he said,
draining his plastic cup
“none bigger,” I said back

then
he told me
a joke about
the President
of the United States
and then he told me
another joke
about
someone who
I didn’t know,
…a Hollywood actress
and I laughed
tho’ I didn’t know the woman
and then he told me
that his wife had
founded her own
Foundation in the name
of her father
a saintly old fool
who’d quite by accident
made more money than
God should allow
but who had died too young
and very conveniently
…and quietly
and with no remorse
or regrets
whatsoever…

“God” I said…
“God is a good thing”
…and the CEO said God was
a fine and good thing too
…money…God
…all of it
…
and we’d laughed
because we were
both
…drunk
at 35000 feet,
…he in a fine suit
AND
me with a half-written
valise of shit
in the overhead
But
…the two of us
were rushing
together
toward the same end
just
four and a half hours
out of Cincinnati

they want the best for us
don’t they?
like
the teacher
who told you
that your work
reminded her
of Paul Cezanne
and you thought of
that lady
in her
green hat
and you think that you
would have painted her
differently

damned ants
I stomp on them
early in the morning
as i make my way
to the coffee pot
little pests,

we’ll be here
for at least
another
fifteen years

Follow Ed's end of the planet books on WordPress.com
Join 1,448 other subscribers

"in all chaos there is a cosmos, in all disorder a secret order." - carl jung

a repository of experimental haiku & poetry

I think a lot but write very little.

Poetry for Finding Meaning in the Madness

welcome to my metaphors

www.kcaria.com/
www.shadowofiris.com/
Eye Will Not Cry